Don’t look around you: no one will raise their hand for fear of appearing ignorant.

But have you really heard about it? I doubt it. Every day, I hear totally false explanations on the subject. Some call this toxin “the toxin of youth,” as if it had the power to keep you younger longer! I’m always a bit scandalized to hear things like “I LIKE TO KNOW I’M DELAYING THE AGING OF MY FACE!” after a series of injections. Because, in fact, this toxin could very well accelerate the aging of your skin if you start too early, not to mention the considerable accumulation of scar tissue if you do it twice a year, as recommended. The botulinum toxin remains, to this day, one of the most potent poisons known. Even though the doses used for therapeutic or cosmetic purposes are too weak to cause any problems, there does exist a risk of iatrogenic botulism resulting from an accident (dosage error) or overdosage of unlicensed products.

Let’s go back in history to understand how the botulinum toxin has become so popular over the last few years.

The botulinum toxin was first discovered in 1970 while studying a case of botulism in a child, but its medical and aesthetical utilization began only in the 1980s. It was first used in rare disease cases like dystonia, which affects certain parts of the body such as the neck, a condition called “spasmodic torticollis,” and the eyelids (blepharospasm). This is how Dr. Jean Carruthers (an ophthalmologist), treating a female patient for blepharospasm, noticed a certain attenuation of the glabella lines. This unexpected effect prompted her to pursue her research with her husband, a dermatologist, Dr. Alastair Carruthers, and this is how the aesthetical application of the botulinum toxin was discovered by accident in the late 1980s. Afterwards, in the United States, the aesthetical utilization of the botulinum toxin became a societal phenomenon which benefitted the Allergan laboratory marketing it. Other trade names are Dysport (Ipsen laboratory), Vistabel, Bocouture, and Xeomin.

This toxin is now also used to treat excessive perspiration (hyperhidrosis) and drooling (ptyalism) problems because of its action on the receptors of the parasympathetic system.

Talking about receptors, how does the botulinum toxin work? In fact, it works by inhibiting the release of acetylcholine at the motor end-plate of the muscle and in the parasympathetic nervous system. More exactly, it intervenes at the level of the fusion of acetylcholine vesicles with the membrane of the nerve cell by acting on the SNARE complex. The SNARE complex enables the fusion of the vesicle and the presynaptic membrane. Thus the acetylcholine receptors of the muscle cells remain empty and the muscle does not contract, which induces a flaccid paralysis. But paralysis means quasi-complete muscular atrophy in the long term. Have you ever spent a few weeks in a plaster cast? I have, and when my calf came out of it, it was skinny, shortened, and very stiff. I had to do months of rehabilitation to recover the strength of my calf muscle. Tell me: who brings their lion’s wrinkles to the gym? Nobody! But you should. Some very interesting studies are turning up, showing results with… facial yoga.

Muscle contraction is very important to maintain the quality and function of the various body tissues. For the skin, that means primarily nutritional input. Since the epidermis contains no blood vessels, it manages to survive through the distribution of blood vessel nutrients from dermis to epidermis. So, it is essential to maintain for as long as possible the anchorage between epidermis and dermis through the dermal-epidermal junction. To preserve its strength, it is necessary to maintain the function of the fibroblasts responsible for its maintenance as they are responsible for fabricating the extracellular matrix of the dermis. And how does the body deliver blood to the tissues? By muscle contraction! Which means if the muscles of our expression wrinkles–Botox® injections act only on dynamic wrinkles, or wrinkles of muscular origin, such as lion’s wrinkles (corrugator and pyramidal muscles) and crow’s feet (frontal  muscle and external fibres of the orbicular muscle) – atrophy too young, e.g. in the twenties, the skin in this area will age faster for lack of nerve stimulation and nutritional input. So, instead of helping you to stay young, it will do the opposite. Don’t be in too much of a hurry to use it, because it will not prevent the appearance of wrinkles that don’t exist YET, but it will accelerate the aging of your entire skin in this area. I find it a bit sad that we are ruining the faces of thousands of young North-Americans just to make a few bucks, while there now exist several interesting alternatives in cosmetology.

I hear you asking, “But which ones?” Let’s look at four of them.

I always advocate starting with temporary options such as creams before resorting to invasive methods. This is to see the effects before moving on to needles or to sustain the effects of your injections a little longer in order to space them out and prevent a considerable accumulation of scar tissue from happening too fast in such a small area of skin. Since the botulinum toxin is administered using needles, these create at each visit a string of scar tissue. It’s small, of course, but imagine twice a year for 20 years. That means 40 injections, so 40 strings of scar tissue on a square centimeter of skin, if we’re talking about the area of lion’s wrinkles between the eyebrows. This number is already very significant! If you started when you were 25, it means that by the age of 45, you will almost have reached saturation in this area. The forties are actually the best time to start, as expression wrinkles will have started to remain visible even at rest. You might be forced to stop and your skin will be flaccid in this spot. It might not be very pretty, and we have not yet developed any treatments to repair these side effects.

The biggest problem is that we have no historical background data on the extended use of this toxin in the face, and therefore no solution available if the situation goes wrong. We have only ONE FACE and it’s precious. We see more and more cases of sagging on one side of the face, eyes that no longer open completely, drooping smiles, corners of the mouth going down instead of up, and sometimes even slurred speech.

The first peptide developed for expression wrinkles is called Argireline® (INCI: Acetyl Hexapeptide-8). As you remember, we spoke earlier about the SNARE complex; well, Argireline® was designed to act in the presynaptic mechanism to reduce the contraction that leads to wrinkle formation. This peptide is the replica of N-terminal end of SNAP 25, which competes with this natural protein for a position in the SNARE complex, destabilizing its formation, without breaking any of its components. If the SNARE complex is slightly destabilized, the vesicle cannot release neurotransmitters efficiently. Consequently, the muscle is relaxed rather than paralyzed, decreasing the formation of lines and wrinkles.

So, Argireline® targets the same protein complex as botulinum toxin A, modulating muscle contraction. Thus, this is a safer active ingredient with proven efficacy in destabilizing the SNARE complex, reducing wrinkle formation and minimizing the depth, volume and length of existing wrinkles and expression lines in vivo, as well as skin roughness. 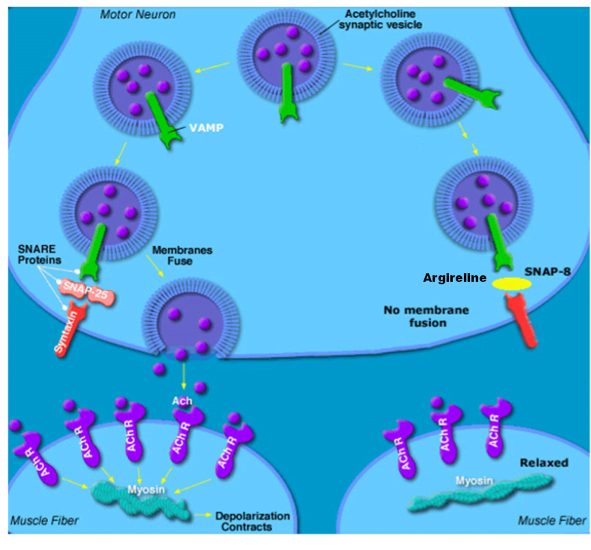 Another one, obtained by an elongation of the famous hexapeptide Argireline®, is an octapeptide called SNAP-8 (INCI: Acetyl Octapeptide-3). Those same studies which brought us Argireline® have now been applied to developing another addition to the botulinum toxin-inspired family of peptides. This one also works by mimicking the N-terminal end of SNAP-25 and competes with SNAP-25 for a position in the SNARE complex, thereby modulating its formation. But SNAP-8 is slightly less effective than Argireline®.

A more recent version, developed by a Spanish company, is called BoNT-L peptide (INCI: Palmitoyl Hexapeptide-19). As you can see, peptides are perfect to create Botox-like, effective therapy. This peptide inactivates SNAP-25 from the SNARE complex. It prevents the fusion of acetylcholine-filled vesicles with the plasmatic membrane. The consequence is the prevention of the release of acetylcholine into the synaptic cleft, resulting in muscle relaxation. The zones that can be treated by it are the horizontal forehead area (thinker’s wrinkles), periorbital lateral line folds (crow’s feet), glabellar frown lines, upper lip wrinkles, platysmal folds (turkey neck) and décolleté folds.

And, last but not least, not a peptide this time, Gatuline® Expression. It was developed from Acmella oleracea (INCI), also called “Mafane,” a small yellow flower traditionally used as a medical plant, that shows natural anesthetic properties (sourced mainly on Madagascar and the Mascarene Islands). The Spilanthol found in this flower, an alkylamide, has been shown to be the molecule bringing the myorelaxant action to this ingredient. It efficiently fights the appearance of expression wrinkles and visibly smoothens the skin’s surface. Eye and lip contours are quickly and efficiently redesigned. But most surprising is the fact that it’s approved for ECOCERT/COSMOS certification. This means that today, we can act effectively on expression lines with a natural/organic cosmetic product!

I hope this has encouraged you to seek alternative methods to preserve the health and vitality of your skin for as long as possible.

Don’t forget that our expression wrinkles are, more than anything, the “weight” of our emotions. They express our path through life. Live your emotions and move your face, while not forgetting the constant use of sunscreens, and believe me, under those circumstances, your face will stay young for a long time!

Do you have skin problem and are you looking for a health or beauty professional able to take care of you and listen to you?

Our Ambassador in Québec City

Are you from Québec City or Eastern Québec? We now have an ambassador who works for you to form groups closer to your home. For questions and registration, contact esthetiquemr@hotmail.com.